Sunday 13th November 2016
This game was a tale of 2 halves, we started very well and looked in total control and kept the ball very well. We raced into a 4-0 lead without even getting out of second gear and were a threat from every set piece.
The first goal was scored by midfielder Becky Tebb on 5 minutes who rifled into the side netting of the goal from a half cleared corner, a fantastic finish which gave the goalkeeper absolutely no chance. 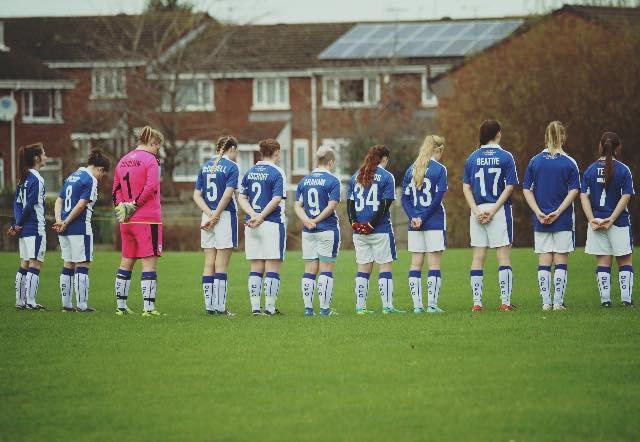 Our 2nd goal on 9 minutes was scored by Amy Whittle, a fine corner delivery resulted in Amy Whittle beating the keeper to the ball at the near post and heading into the roof of the net.
Our 3rd of the afternoon on 24 minutes was again from a corner and another Sam Pickup delivery, Sarah Redman who had gone close twice previously, beat her marker before thumping an unstoppable header beyond the keeper.
The 4th of the afternoon was this time scored by creator in chief Sam Pickup, racing through onto a defence splitting pass from centre back Hannah Collins before dinking over the keeper on 36 minutes.
Right on half time a reckless challenge in our penalty area resulted in Witton pulling a goal back against the run of play from the penalty spot, Charlotte Dunbebin desperately unlucky not to save it with her legs.
Changes were made at half time due to injuries and to take a look at some fringe players and normal service was resumed with Phoebe Graham who was now playing on the left hand of midfield racing onto a Jamie McDowell through ball and chipping the oncoming keeper on 60 minutes.
Amy Whittle grabbed her 2nd of the game with another thumping header from another fine Sam Pickup corner delivery in the 69th minute.
We did concede 2 late goals which made the score look more respectable for Witton from what were 2 mistakes, which we are disappointed with. Their Captain Danielle Lydiate driving through and firing home from 20 yards and their striker capitalising on a mistake and placing past Charlotte Dunbebin.
Overall it was a job done against tricky opponents and we took the 3 points, with Crewe dropping points again and our superior goal difference we remain top of the league with remaining there firmly in our own hands.
Goal Scorers:
Tebb
Whittle x 2
Pickup
Redman
Graham
Assists:
Pickup x 3
Collins
McDowell
Player of the match: Sam Pickup