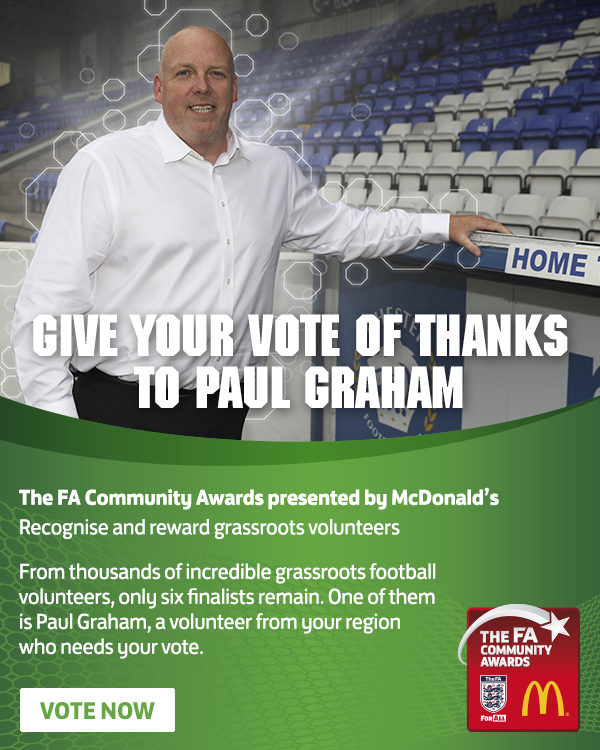 The People’s Award recognises an outstanding contribution to community football and Paul, secretary of the Chester and Wirral Football League, is one of six regional winners who have made a massive impact in their community, be it for their league, club, fellow volunteers or players.

Paul, who lives in Blacon, has had many roles in football but the most recent as a member of the Chester and Wirral Football League committee has been his most impactful. Paul has been influential in driving local football by creating new leagues & developing playing opportunities for all including veteran players, referees & partnering with Chester FC to run coaching sessions. As a result he has turned around the league’s team decline to growth going from 22 teams to 77.

The FA is now inviting football fans to vote for they believe most deserves the award and the Chester community is encouraged to get behind Paul and vote at www.thefa.com/get-involved/community/fa-community-awards/peoples-award/vote-2017.

“I’ve been fortunate enough to get to know Paul well through football and his passion for the game, the community and his forward-thinking has transformed the Chester & Wirral Football League.”

The FA Community Awards are split into several categories and each category is judged at a county and a regional level before a national shortlist is created from the regional winners of each category. In 2016, more than 2,000 nominations were put forward for the awards in England.

The national winners for each category – except for the People’s Award – are chosen by a national panel comprised of ex-professionals and past winners. The national winner of the People’s Award is voted for by the public and announced at The FA Community Awards national ceremony. This very special award celebrates exceptional volunteering efforts and carries the added prestige of being voted for by the public.

You can find more information on the awards and past winners at www.mcdonalds.co.uk/communityawards.