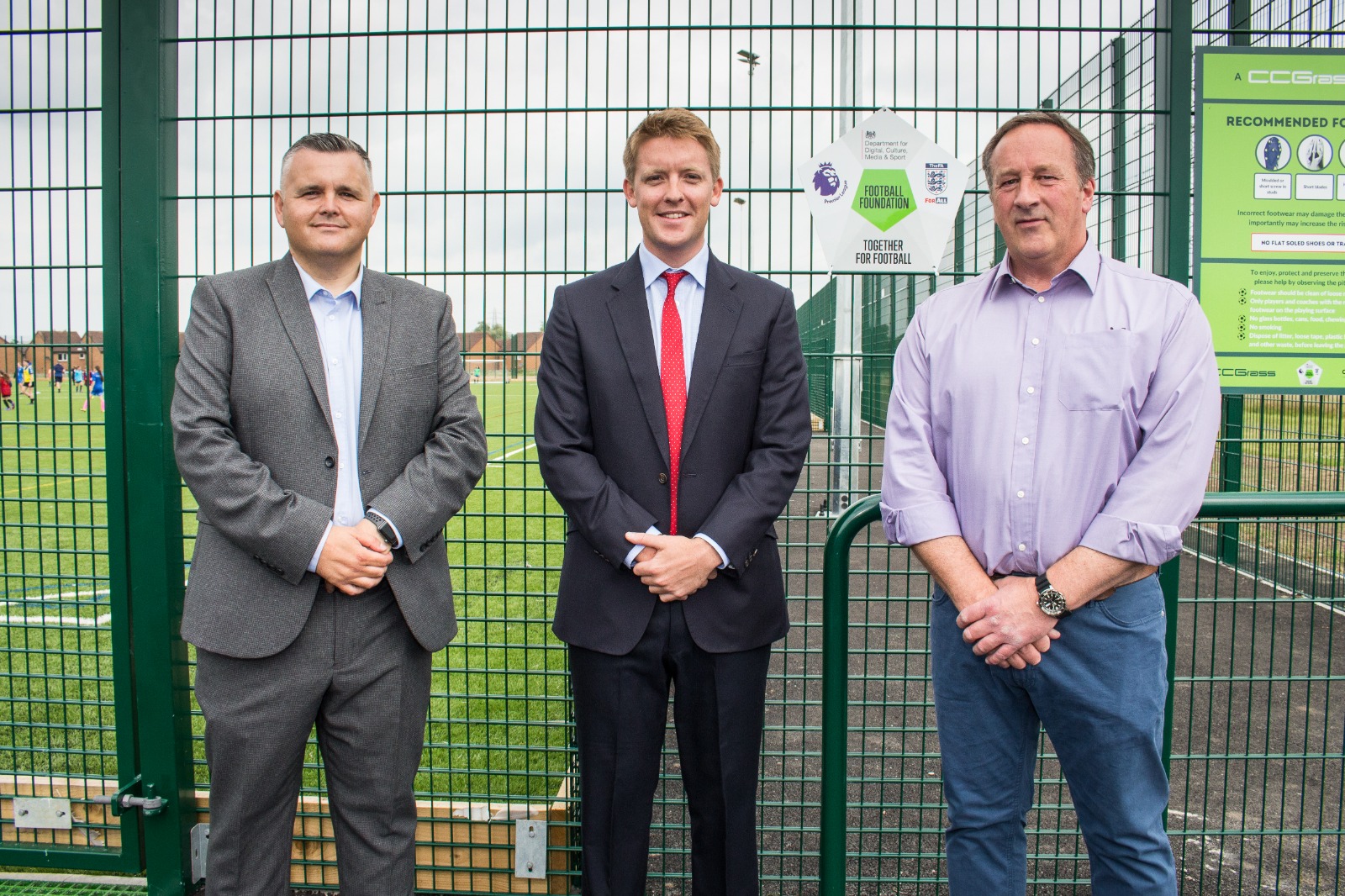 Chester FC Community Trust has celebrated the opening of its new state-of-the-art sports hub with a special event on Friday, 24 June.

The project was made possible thanks to a £1m investment from the Premier League, The FA and Government’s Football Foundation, together with partnership funding from the Westminster Foundation, Cheshire West & Chester Council, Avenue Services, Ursula Keyes Trust and the Community Trust.

The Duke, whose Westminster Foundation made a £520,000 grant towards the King George V Sports Hub, was joined by Community Trust staff and trustees, partners and funders for the opening, during which children from eight Chester primary schools took part in a girls’ football tournament on the new 3G pitch. Also in attendance were Blacon ward councillors Carol Gahan and Shelia Little, City of Chester MP Chris Matheson, and Chester FC first team manager Calum McIntyre and club captain George Glendon.

The sports hub is available for the community to hire and will be used by partner clubs and leagues, including Saughall Colts, Upton JFC, Chester FC Women, Cheshire Girls Football League and Chester & Wirral Football League, for training and matches, helping grow participation in football.

The Community Trust is now based at the site and will deliver sport, education, health and inclusion activities for the community, including mental health and wellbeing football, disability football, walking football, toddler sessions, exercise groups and training courses.

Construction of the facility, which has been developed on recreational land off Blacon Avenue, began in September 2021 with the 3G pitch opening to the public earlier this month. Work is also underway to improve the adjoining King George V Playing Fields with new drainage for the grass pitches and refurbishment of the derelict pavilion.

“It will support people’s ability to play our national game locally and therefore help unlock football’s many benefits to physical and mental wellbeing. That’s why we’re committed to transforming the face of grassroots football facilities in this country. It’s therefore very welcome news to hear that Chester FC Community Trust has developed this state-of-the-art sports hub, thanks to investment from the Football Foundation.

“The Football Foundation is working closely with our partners – the Premier League, The FA, government and Sport England – support facility development projects like this across the country over the next decade to transform our grassroots game and unlock the power of pitches.”

Speaking at the unveiling of the facility, The Duke of Westminster, Chair of the Westminster Foundation which provides sustainable help for vulnerable children and young people, said:

“It’s clear that a great deal of thought and hard work has been ploughed into this incredible facility.

“The most exciting aspect of it is knowing that it will benefit hundreds, if not thousands, of young people for generations to come. And I’m delighted it will finally provide a much-needed home for Cheshire’s women and girl’s football

“I’ve been heartened by the collective support both locally, and from the various partners, to deliver such a high-quality environment.”

Councillor Louise Gittins, Leader of Cheshire West and Chester Council, said: “This is going to be fantastic for not only Blacon residents of all ages but for the many teams and individuals that will also be able to benefit from this new sports hub.”

“This wonderful facility puts Chester FC Community Trust at the heart of our community and we are excited at the opportunities it will create to improve the lives of children, young people, families and older people, both now and for generations to come.

“We are hugely grateful for the outstanding support, belief and encouragement we have received from everyone involved in this project and it simply would not have been possible without them.”