The sports hub, which opens to the public this month, was named as winner of the Grassroots Project of the Year award. 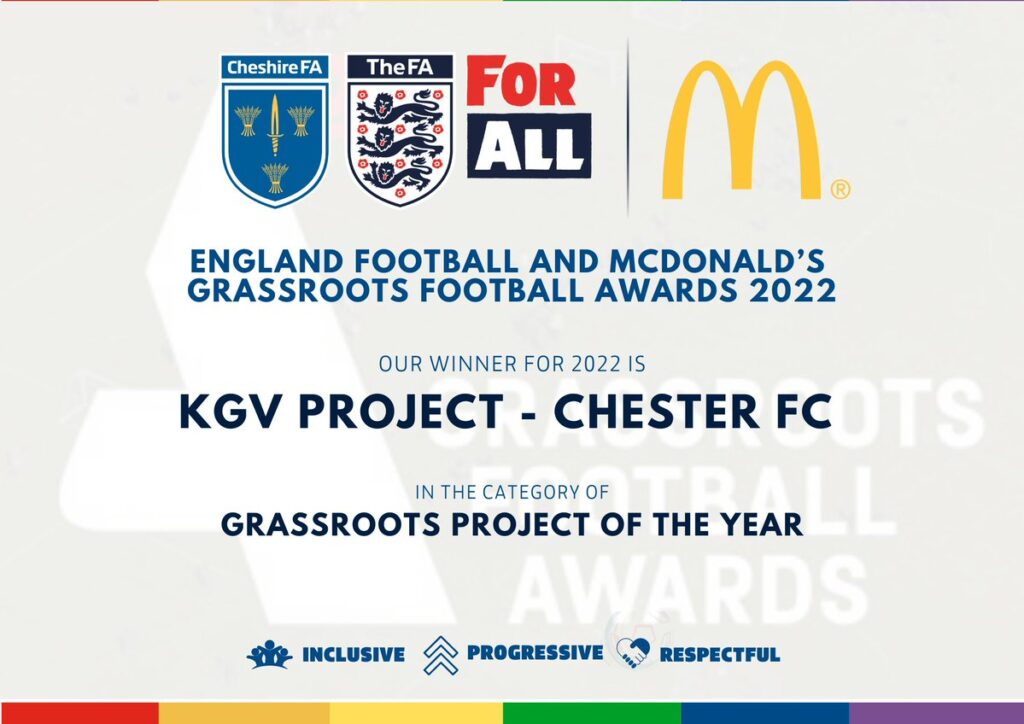 Developed in collaboration with Cheshire West & Chester Council, the £1.8 million project has created a full-size floodlit 3G artificial grass pitch and clubhouse, while the pavilion and grass pitches at King George V Playing Fields are also being improved.

With support from Cheshire FA, the scheme secured a £1 million grant from the Premier League, The FA and Football Foundation, with additional funding from the Council, Westminster Foundation, Avenue Services, Ursula Keyes Trust and the Community Trust.

The sports hub will become home to the Community Trust, which is a registered charity, and provide training and match facilities for a number of partner grassroots clubs and leagues.

Nominated by fellow members of the Cheshire grassroots football community, the local winners of this year’s England Football and McDonald’s Grassroots Football Awards will now be put forward for regional accolades, with the winners of the regional awards later in line to win the national titles; which are traditionally presented at the FA Community Shield fixture.

Danielle Shields, Football Development Manager at Cheshire FA, said: “We were delighted to receive so many nominations from our community earlier this year, making the decision of our judging panel very difficult. Congratulations go out to all of our winners and those that have been highly commended.

“Needless to say, we’re very lucky to have so many passionate individuals, clubs and projects involved in football in Cheshire – and whilst we’re pleased to award our deserving winners, we’re also aware that our winners count for a small number of the many making football happen across our county every week. Cheshire FA appreciates the work that every single person involved puts into growing our game season upon season.”

A full list of local winners for the 2022 England Football and McDonald’s Grassroots Football Awards can be found below:

Grassroots League of the Year
Chester and Wirral League